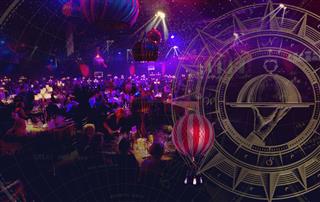 It's become known as the biggest charity party in Battersea, and there's no doubt that for many people this event has always marked the start of the festive season. In 2014 over 1400 people came along, raising a record £81,000 to help the Battersea Crime Prevention Pane fund the Sport in the Park event, and many other projects.

From this year the event will be known as the Battersea Ball.

The first ball was in 1992, in the Battersea Town Hall, now the Battersea Arts Centre. The ball was the brainchild of PC John Johnson and the aim was to raise funds for Alarms for the Elderly. Around 200 people attended, and the event confounded everyone's expectations by raising over £1,000.

The event soon outgrew the space available in the Town Hall, as the demand for tickets rapidly rose, and the Ball's next home was a large marquee in Battersea Park.

For some years now the event has been staged at Battersea Evolution. It has become one of the largest charity Balls in London and is the reason why the Panel is able to function so successfully, with much of its funding coming from income raised by this event.

The organisation is co-ordinated by a small, dedicated committee. The detailed planning involves providing all the auction items, 450 raffle prizes, arranging publicity, producing the progamme and finding advertising to cover costs. Volunteers are always very welcome! The actual Ball office is run by a single individual who undertakes the formidable task of overseeing the detailed co-ordination with the hospitality company; issuing tickets, and drawing up a seating plan for over 1600 revellers.

It's a tribute to the team's efficiency that everyone always has a wonderful time, with people returning year after year!

The 2018 Ball attracted 200 new guests, which helped raised even more funds for the charity. Tickets will be on sale soon for this year's extravaganza on Saturday 30 November 2019 with the exciting new theme.  Tickets are £62.50 (Discount available for early bookers). You can order tickets at Battersea Ball, or you can email the ball office at  [email protected] or phone 07809 474 456 between 2pm and 6pm Monday to Friday. To avoid disappointment don't delay, tickets go very quickly.

Providing financial help to FAST to further its work on the Patmore estate with training, employment and other initiatives with young people

Since 1992 the Battersea Summer Scheme has been organising trips, outings and events for disadvantaged young people living in Battersea and Balham.